Today was all about taking the materials we’d harvested from the woods yesterday, and adding value to them.  Of course we also learnt skills, so we added value to ourselves too.  But before all that, we reinforced the lesson that we learnt yesterday about time… we looked through some tools that Paul had inherited from his Dad, and learnt a little about which were worth keeping and which not. 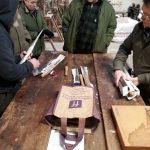 Taking time to sort through some tools

For pole lathe turning, Maurice recommended keeping an open sweep gouge (say 17 – though we aren’t really sure what the numbers mean… the bigger the number, the bigger the sweep), a spindle gouge (small number, very “u” shaped), and a 2″ flat chisel.  The chisel will be used to get a “rolling pin smooth” finish on the pole lathe.  I suspect that a fair bit of skill will be required along with the correct tool here.  Nonetheless, I’ll use some of this knowledge next time I’m at a market and rummaging through boxes of old tools. 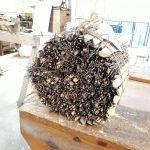 The eagle eyed among you may have spotted the very attractive bundle of wood featured as the blog image, and repeated here.  Yesterday I didn’t know what a pimp was – well now I do!

Our first task of the day was to make a besom broom.  These are brushes, mostly for outdoor use, that flick, rather than sweep.  They also have a certain familiarity as a form of transport for wizards.  As well as flying, they are good for flicking leaves off lawns, removing slag from iron (granted, this is quite a rarefied task, mostly applicable to blacksmiths.  I just couldn’t resist the opportunity to introduce another word), and clearing up workshops… (we practised this later on). 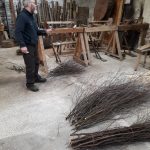 The first step in making a besom broom is to grade the whippiest birch into lengths of about three foot, with the whippy ends lined up.  Shorter pieces of birch are added to the pile too – ideally around the area that will become the handle – they’ll get captured by the wire ties there. 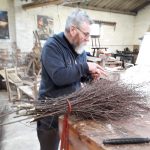 Once the bundle is big enough (personal choice here), it’s clamped up in a vice (or the hands of a colleague), ready to be tied.  It’s worth making sure the whippy ends are all about the same length here – that’s what Maurice’s two handed point is emphasising.  For a really neat, artisan besom, the bundle is hand selected to get these ends lined up just right.

Tying and finishing the bundle 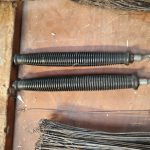 Three wire ties, spaced around 3-4 inches apart, secure the bundle.  For a really traditional, artisan product, ribbons of ash could be used.  But, for us, the critical tool at this point is used to twist the wire ties together.  Sadly, this device has a boring, prosaic name… “Twisting tool for cable ties” or “Wire Tie Pull Twist Tool”.  The best option I could discover was “Twister tool”. 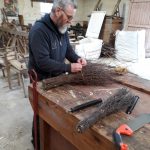 It’s a temperamental beast – the wire ties are particularly prone to snapping.  The important skill here was to stop tightening. More work required here for me.

After this, the twiggy ends at the base of the head are sawn off, about 2 inches from the bottom wire.  Then a piece of twine can be used to encourage the whippy birch at the other end to come in together. This can be left on in use, or removed first. 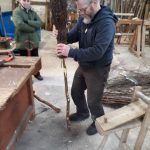 We used straightish pieces of yesterday’s birch for the handles, but something dryer and stronger could also be used.  We cleaned off the bark (another personal choice), and smoothed out the bigger knots with a drawknife on the shavehorse. The 12 inches at the narrower end was formed into a smooth straight blunt point.  We wiggled this point into the centre of the besom head, and then banged the head down, onto the handle.  I marked the handle at about 12 inches, and banged it until the handle was buried up to the mark.

Next on the product list was tent pegs.  We didn’t harvest this material yesterday, but if you’ve some lengths of clean straight ash, then you can use it to make a bundle of pegs. 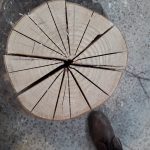 Tent pegs can be made in various sizes – 9 / 12 / 14 inches etc., so cut a log to that length, and tie a piece of twine around it.  You’ll appreciate not bending down to pick up multiple wedges of wood every time you split it.  Logs of 6-8 inches can be split radially into 16 pieces, and with larger logs, each of the radial wedges can be split further.  A similar method to this can be used to make tines for hay rakes, but the log is split to a 3/4 inch grid. 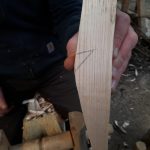 Each wedge is shaped using a drawknife – or a stock knife for more efficiency.  The point of the wedge is removed, the bark side cleaned, and the sides smoothed.  A saw can be used to cut the angle of the head of the peg.  The drawknife the cuts into the other angle.  More shaping of the head end makes sure that the head has the same cross section, and follows the same grain as the narrowest point of the cut.  The foot of the peg is shaped into a pointed triangle, and bevels added to the head and the foot. 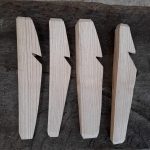 Consistency of tent peg shape is something I will need to work at. 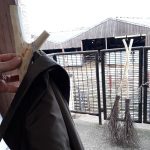 I found a useful branch in the woods yesterday.  It was just asking to be made into a coat hook.  I axed the back face smooth and flat, and then used a combination of drawknife and carving knife to shape the hook.  Having borrowed Paul’s axe (it was a Svante Djarv – I couldn’t resist), and Graham’s carving knife (a Mora 106, mine was in the boot of my car), I then needed to find a coat with a hanging tab to test the coat hook.  Paul’s jacket did the trick.  Once home I realised that I really should have made two hooks – not for coats, but for broom stick storage. 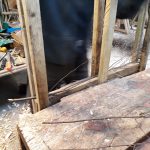 With the jig made, and the product graded, we worked out a method for assembling the mats.  With the wire (4 lengths of 2mm wire, about 5 foot long) lined up in the jig, we piled two handfuls (Graham-hand-fulls, to be precise) into the jig, with butts at alternating ends.  Then we squeezed each bundle tight, and tightened the wire around it.  A twist secured the bundle.  We repeated this until the jig was full – around 5 to 6 twists worth, or 10-12 handfuls. After this, we snipped both of the ends straight with secateurs.

The tough task was twisting the wire – I’d like to try this again using the wire ties, and the twister tool, rather than using continuous lengths.  The tie for each subsequent bundle could be locked into the preceding wire tie.  I think using ties would be faster, and easier on the hands.  It would also make it easier to keep a constant bundle size – the Graham-hand-full gauge wasn’t very consistent.  Actually, ideally, I’d like to try this again in the woods, with a portable jig.  I’m much attracted by the thought of only bringing boot mats out of the woods, rather than bundles of birch – they’d certainly fit into the boot of a car much better.

At one point, Graham confided to me that he didn’t really see making tent pegs as part of his future plans.  And it’s true, I may not ever make another tent peg either.  But I will be using a drawknife many times in the future, and every single cut I make on the shavehorse, or billet I axe to size is giving my muscles and my brain a chance to learn and process and improve.  So I realise that the aim is to learn the process of making, rather than necessarily how to make specific things.

Back to the woods

Our experience today gave more insight into the work we did yesterday.  Maurice talked yesterday about handling the wood once, and not wasting effort to bring waste material out of the woods.  A couple of times yesterday he discarded a piece of birch, and we’d question why.  I think we’ve a better idea why now – why expend the effort to bundle up a poorer quality piece of birch (fewer springy twiggy bits, or too short and fan shaped), and bring it out of the woods, only to put it on the waste pile in the workshop?  In the ideal world, the waste pile stays in the woods. 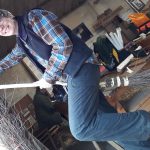 The broom almost got off the ground