This week on the Greenwood Certificate Course, we learnt about Willow World, and met one of its inhabitants.  Sometimes this place is also known as Wickers World, but on first observation there do seem to be subtle differences.  I’ve only been exposed to these new creatures and their habitat for a very short time…  so please don’t view this blog post as the definitive word on these creatures or this environment.  Very few books on this arcane subject exist; the best way to discover more about this world is to find a native guide.

Missionaries from Willow World are sometimes encountered in other habitats.  They are keen to talk about their world, and to introduce other species to the wonders of willow.  The motive behind this is ostensibly to spread the craft.  A slightly more sinister interpretation of this willingness to share might be that these missionaries are actually akin to drug pushers.  They get other species fascinated by willow, and addicted to using it.  It has been observed that these missionaries are sometimes also the only local suppliers.

Inhabitants of Willow World are very similar in physical characteristics to other humans.  However, on closer examination, they possess some distinct traits, and can be identified by careful observation.

The hands of Willow Workers (as the inhabitants of Willow World can be known) are often slightly dark in colour, and have well developed muscles in the fingers and thumbs.  Combined with the strength imbued by these muscles, willow workers also have exceptional digital dexterity.  In general, the skin on the hands is very dry, and they often have no discernible finger prints.

Upon very close examination, it might also be possible to observe strange markings on the torso of willow workers.  These might take the form of circular indentations, red in colour, in the stomach area and in the area of the sternum.  The markings in the sternum will tend to be singular, whereas in the stomach area, these indentations will more likely be present in multiples of three or four.  Some willow workers may also have scarring in the forearm region, although this is not so widespread.

The language of the willow worker is most easily documented through the medium of basket making.  The style of basket making that we explored today is known as “English round work”.  Although some similarities to standard English were present in the language, there are also many unique words. 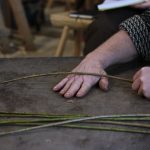 The slath forms the base of an English round work basket.  Not all slaths are created equal… a sturdy slath is a “four through three slath”.  This leads to 14 spokes and a robust basket.  Weaker baskets might be based around a slath that is just a “three through three” or a “two through two” (or other variations).  We’re interested in high quality baskets – so it’s a “four through three” for us… To create this slath, take seven sticks of 7′ long willow.  The longer stems will give a chunky slath.  Use secateurs to make a flat cut on the butt end of the stick, and then cut the stick to the diameter of base required (plus a couple of inches).  Bend and manipulate each stick to make a shallow arch, about 1.5 inches in depth.  Manipulate each stick to have the same bend.

Take a shaving (around 2.5 inches long) from the concave side at the centre of each of the set of four.  This shaving aims to remove around a third of the width of the stick.  The shaving should be deep enough to expose the ghost of the pith. 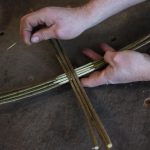 Crossed sticks base of slath

Use bodkin to pierce the centre of the set of three sticks (slightly to the concave side of centre).  Thread each stick onto the bodkin, and then fit the set of four sticks through the holes in the three sticks.  The slipe helps the sticks to thread through.

Tying in the slath 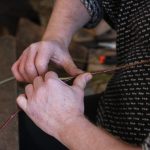 Make two long scalloms making a cut through the bark on a bent stick, about 12-14 inches from the butt end.  After this initial cut, cleave (or rive) the rest of the stick through the pith using fingers and thumbs.  Listen out for the “snap, crackle and pop” as the fibres separate. 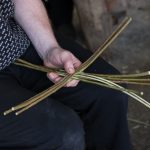 Thread these long scalloms  into the crossed sticks, in line with the four sticks, with the cut side up.  The rest of the long scalloms wave around like antennae on a bed bug. 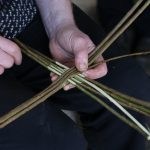 Right-hand scallom bent forward and to the left 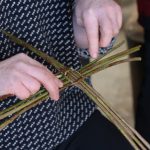 Scalloms are woven around the central sticks – tying in the slath

Turn the crossed sticks through 90 degrees and repeat the weave.  Finish twelve stitches (or three rows of stitches) like this. 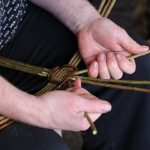 The sticks need to be separated to form fourteen spokes.  Separate the set of four first. 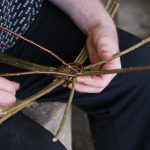 Once separated, make another weave with the scalloms, then bring the back scallom through the gap between the first two spokes.  Thread the top scallom over the top of this, and push the two scalloms firmly inwards towards the centre.  This push is important.  Bring this scallom up the next gap.  Now the two scalloms are both towards the surface of the weave.  They are “paired”, making a paired weave. Repeat this paired weave around the slath.  Separate each set of sticks spokes as the weave approaches.  Chanting “Behind – Push – To the front” repeatedly helps the weaving processes. 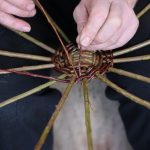 The willow is not infinitely long.  Each stick comes to an end, but the weave must continue.  When the end is too short to weave further, choose another two willow sticks.  Pull the trailing end up around the preceding spoke, and thread the new tip through the gap, and back up the other side of the spoke.  This end can now be woven, and the same join performed with the “new” trailing end.  The end tips remain on the concave side of the base – this becomes the bottom of the base. 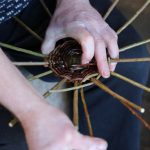 The next join will be a butt-to-butt join.  Cut a slipe on the end of each new stick.  The trailing butt end flicks against a spoke.  Fit the new butt slipe down the left side of this spoke, until it’s “finger and thumb tight”. 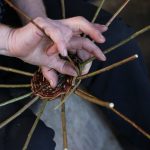 Bend the new stick forward with a thumb crease, and weave it in.  Join the “new” trailing butt end in the same way – flick, fit to the left, thumb-crease, weave.

As the paired weave continues, tweak the spokes to try to make them evenly spaced.  Reinforce the “dome” shape of the base by pushing downwards in the centre of the slath.  As the weave grows and approaches the ends of the spokes, the last stick must end with tips. 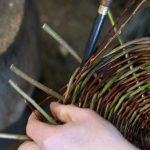 Weave the trailing tip forward, and use the bodkin to make a hole between the sticks in the preceding row.  Thread the tip through this hole, and then pull it slightly backwards to catch between the weave.

After threading away, trim all the ends – except the last two trailing tips.  Do it with secateurs, and trim each end so that the cut end rests on the “knee” of the spoke. 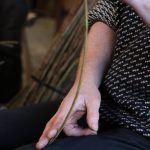 Belly is on the inside of the curve

This is the point where it’s important to be working in a biggish area.  We need a stake for each side of each spoke.  That’s 28 stakes, graded to choose butt ends that are regular in size.  Each stake needs to be sliped.  The slipe is made on the belly of each stake.  The belly is the inside of the curve (concave), and the back is the outside (convex).  28 stakes gave plenty of chances to practise sliping.  It is important not to have flappy slipes, where the angle is too shallow, and a flap of bark is created.  It’s also important to avoid stubby slipes, with a angle that is too flat.  A slipey slipe is ideal, with a cut surface of around one inch in length.

Once all the stakes are sliped, each spoke on the base is trimmed.  The trim cut is made close to the pairing, with the skinny blade of the secateurs towards the inside. 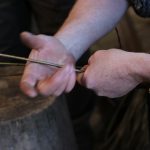 Once trimmed, fit a stake to either side of each spoke.  With the base upside-down (cut ends upwards), the slipe cuts are also upwards.  This will mean that the sides of the basket will tend to slope outwards.  For an “Alibaba” shape basket, the slipe should be cut to the other side of the stake.  The basket-maker’s hammer is used to fit each stake.

With the base the right way up again (dome up), prick up each of the 28 stakes.  Use the shop knife to puncture the centre of each stake, then bend each stake upwards while twisting the knife.

Willow workers are often found in and around willow beds.  Many of them collect several of these of various sizes.  These beds are full of closely packed willow trees, which the willow worker harvests once per year.

In addition to the willow bed area, for maximum productivity the willow worker also requires a spacious work area. 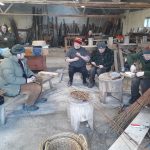 Now a full time inhabitant of Willow World, he grows 43 different varieties of willow, in seven willow beds varying in size from 1/10th to 0.5 acres.  Phil now has a total of two acres of willow beds with approximately 120,000 different plants.  These each produce 10 harvestable shoots per year, leading to a total harvest of over 1 million willow shoots.  The different varieties provide Phil with different weights, colours and workability of willow.  The willow can be cut from October onwards until the middle of April.  Phil invites other users and potential users to help with the willow harvest for a week in January.  This generates enough product for his personal use, and to supply many other addicts.