I think each of us on the course has already dabbled a bit in sharpening.  It’s pretty unavoidable when you’re interested in greenwood work.  But sharpening is one of those skills that is like a rabbit hole… There’s always more to find out about, or different techniques to try, or different systems to use.  We had a chance to do all of these today.  For me, I also wanted to gain a bit of confidence that I’m not doing anything wrong.

I’m not going to detail all the different sharpening options, or much theory.  What stuck with me, that I already knew, but hadn’t really thought through, was the distinctions between grinding, honing and polishing. 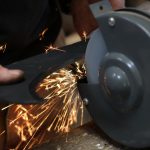 Grinding is when you change the shape of the edge.  You might do this to restore an old, pitted blade, or to repair a damaged, chipped blade.  Some new tools don’t come sharp, so these need to be ground too.

Grinding means removing metal, and this needs an aggressive grit.  This means 400 grit or lower, with respect to abrasive papers.  Different media have different grading systems.

For a damaged edge, joint the edge first.  Grind perpendicular to the tool to flatten the edge.  Flatten off just enough to remove any damage or pitting, or to straighten an edge.  Don’t flatten off too much – to get the edge back, all the flatness has to be ground back to a point.

It’s crucial to get the angle of the grinding right.  This forms the basic shape of the bevels, and if this stage isn’t right, then nothing else will be.  Look at the scratch pattern; the scratches should extend across the whole bevel, showing that the entire bevel surface is in contact with the abrasive.  You know you’ve finished grinding when a “wire” or “burr” starts to form on the edge.  You’ll often be able to see this, as a light coloured line around the edge;  or you’ll feel it as a roughness at the edge.

Once you’ve formed the basic shape and the two edges form a point, it’s time to hone the edge.  Do this with grits above 400, to about 1200.  It’s still important to get the angle of the grind exactly right.  Honing isn’t about removing metal, it’s about refining the edge.

Honing removes the grinding scratches, and replaces them with finer and finer scratches as the grits become less abrasive (higher numbers).  The honing pushes the burr or wire back and forth from one side to the other.

Polishing uses higher grits, maybe 2500 upwards.  Stropping on leather coated with a compound gives these grits.  During polishing, the scratches disappear altogether, leaving a mirrored surface.  The wire or burr also detaches from the edge.

Sharpening is a motor skill; practise is essential.  Luckily we had plenty of possible tools to hone our skills on. 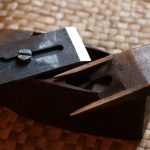 We inherited an old wooden hand plane a while ago, and it’s been living out it’s retirement in the garage.  Finally I have a use for it.  The blade was a bit pitted and wonky.  I used the Tormek grinder to restore the edge.  The blade fitted in a jig, and I passed the blade over the rotating grinding stone for about an hour.  Eventually this removed enough metal to form an edge.

Then I honed.  The Tormek put a hollow (concave) grind on the bevel, so honing the edge didn’t take too long.  A strop on leather, and the edge was ready to try out.  I cleaned up the chipbreaker (that’s the other metal bit in a wooden hand plane), and tried the plane.  It worked!  But (of course) it’ll take me a fair bit of practise to learn to use it well.

I got this from Graham, on the course, and I want to use it to widen out auger holes to make shrink pots.  But first I need to make it work.

I jointed the chisel using 400 grit abrasive paper.  I did this to make the edge flat and perpendicular to the tool.  It didn’t take long.  I ground the bevel on the inside of the chisel (this is what makes it “in cannel”) by using some 400 grit paper wrapped around a dowel.  This took a while.  I also used 400 grit on a block on the outside of the edge.  Eventually this removed all the flat end I’d put on the edge.  Then the wire appeared.