Day 17: From lumps of wood to a pole lathe

We each started making a pole lathe today.  At the beginning of the day there was a large pile of soft wood and hard wood, of different sizes and shapes in the work shop.  There was also a fairly large pile of baked goods – a chocolate and stout cake, hot cross buns, and various cakes and tarts.  By the end of the day, both of the piles had reduced considerably in size. 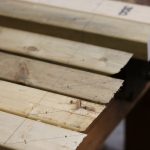 We tested the old carpenters’ adage to the full today.  Mostly, I measured once, marked once, measured again, erased/sanded once, and then marked again.  So far I’ve only had to cut once though.  I’m keeping my fingers crossed that this continues to be the case; or at least that I make my mistakes on the soft wood rather than the hard wood. 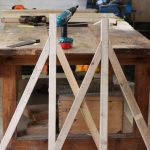 Drilling and screwing into the soft wood was relatively easy.  Soft wood doesn’t need counter sinks for the screws, because the heads easily dig through into the wood.  We were also told that for the legs, accuracy isn’t too critical.  This all changed once we moved onto the hard wood for the bed and the heads. 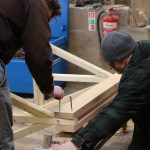 Pete and Dan fitting the bed

The bed station was on the critical path, because we only had one station, and seven lathes to fit the beds to.  Firstly, we clamped the two bed lengths perpendicular to the legs, and then we tried to drill straight holes through all the components.  Coach bolts fitted through these holes to secure the bed to the legs. 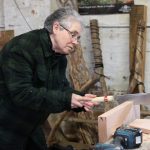 Panel saws, tenon saws, pull saws and push saws.  We tried them all, and mostly started to understand that it’s easy to go off line with a saw cut, and that a Japanese pull saw is slightly more easy to correct than a standard panel saw.  I also found that changing between different saws was a little tricky. 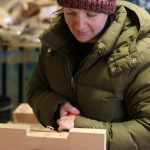 Caroline chiselling out a rebate

Once we’d cut the rebates, we chiselled out the wood.  Accuracy was more important here.  We aimed to cut out a rebate that would snugly fit the tool rests, both in height and depth – with no gapping.  Ideally there would be no pencil marks visible after sawing or chiselling.  My pole lathe is not going to be ideal.

Some rests slotted into place, others were persuaded in using the vise. 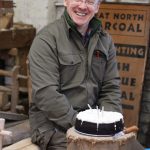 Dan made a birthday cake for Paul.  Chocolate and stout – great combination, and he even remembered to bring candles in the shape of drill bits.   Maurice provided a lighter, and I had a knife – I even tried to clean it.

Half-way to a pole lathe? 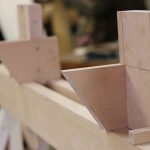 Heads in progress – on bed

By the end of the day we all had legs fitted to beds.  Some heads had tool rests fitted too.