Warning….  Today’s blog is rather factual and informative – perhaps even dry!  I won’t be offended if you read no further.  In fact, you probably only want to keep on reading if either:

a) You think that at some point in the future you might like to visit Willow World yourself, or

b) You want to check whether we did actually manage to complete the baskets.

Yesterday we made the sun – that’s how Spanish basket makers describe the process of tying in the slath (hechando el sol).  And yesterday it was a beautiful sunny day while we made the basket base and pricked up.  Today it rained, but we still finished off the baskets, protecting the corner of the base, weaving up the sides, and putting on the border.  We learnt heaps more language too. 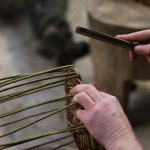 Using the persuader to firm up the stakes

Starting with the base with its pricked up stakes, use a persuader to tap in the elbow (or knee – willow workers are not too fussy about anatomy).  This persuasion secures the stakes more firmly, but it also bruises the joints a bit, and makes them weaker.  This weakness is covered up by the next bit of the basket.

Four rod wale with a pull down

A four rod wale with a pull down protects the stake joints.  Choose eight weave rods that are a little thinner than the stakes (and slightly shorter in length – see “Grading”).  Make a slipey slipe at the butt end. 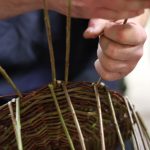 The “12 o-clock rod” is the rod in the centre of the “four through three” slath.  Use the basket-makers hammer to insert four of the new weave rods – one to the left of each of the two stakes that bracket each side of the “12 o-clock rod”.  The cut face of the slipe slides down facing towards each stake.  Remember to use the finger and thumb tug test to make sure these weave rods are fitted correctly. 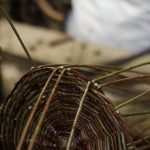 Trailing weave rod to the left and un-thumb-creased 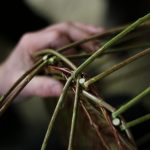 Make a gap between the stake and the spoke, and do a “positive pull-down” into the gap.

The left-most weave rod is now the new trailer; weave it to the front of three stakes and flick it under the fourth.  There is a bigger gap to place this rod, leading to a “dummy pull-down“. 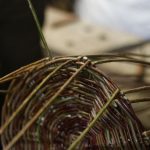 Repeat this chant and weave until you reach the other end of the 12 o-clock spoke – this might be 6 o-clock.  Then leave the original weave rods hanging, and fit the remaining four weave rods to the four stakes around the 6 o-clock spoke.  Repeat the process and the chant with the new weave rods, until you get back around to the 12 o-clock position.  Stop weaving at the point where you can no longer do a positive pull-down. 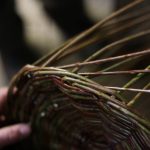 Do the same with the other set of four weavers at the opposite side of the basket. 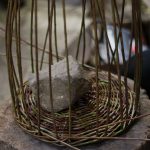 Put a rock in the cage

The three rod wale weaves up most of the sides of the basket.  The first task is to find a pet rock, and put it into the cage. 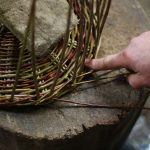 That’s the next gap. The trailing rod will come out here.

There are three weave rods now, and as ever, the left-most rod is the trailer.  This rod weaves in front of the next two stakes, and flicks behind the third stake.  Or another way to think of it is that it weaves so that it flicks out through the next available gap.  This is repeated.  And repeated.  Soon this weave will reach the three weave rods on the opposite side of the basket.  Weave these in the same way.  One of the sets of weave rods will be terminated.  They are “rolled over” by the other set.  Stop repeating when the trailer gets too short to be woven through the next gap. 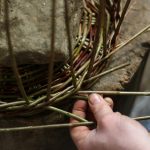 Then it’s time for a tip-to-tip join.  It’s just the same as yesterday.  Choose three new rods.  Trim them so that they’re the same length, and then pull the trailer backwards to expose a little gap, and push the new rod through.  Repeat this for each trailer, and continue the wale.  Use exactly the same process for the butt-to-butt join.

A round basket is the ideal, but sometimes, the basket might stop being very round.  One way to encourage better roundness is to use a four rod wale as the last (corrective) weave on the sides of the basket.  You’ve guessed it, this needs four rods.  Join the rods with a tip-to-tip join, but with the new rods, weave in front of two rods, and then behind two rods.  When you’ve done this with three rods there will be a space behind the trailing rod (of three).  Insert a new trailer into this gap, and begin to weave the four rod wale.  Weave each rod over two stakes, and then under two stakes.  The evenness of this weave (in front of two and behind two, rather than in front of two and behind one) is what helps the weave to improve the circularity of the basket.

The last weave before the border should always end with the tips of the rods.

There are many different types of border.  We learnt a five rod behind two border.  It has many stages… 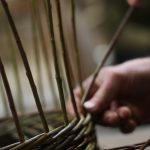 Make a thumb crease in ten stakes, about 1 cm up from the top of the last weave.  Then go back to the first creased stake, and create five horizontals.  The process for this is to… 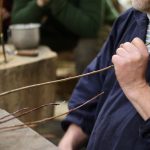 Pull a pint… swing the stake to the left… bring the stake up and over to the right… weave the stake behind the next two vertical (stakes), and then in front of the third. 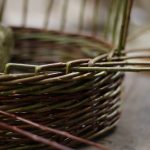 Repeat until five stakes are horizontal. 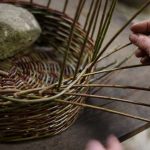 Trailing rod woven into next gap

Take the trailing horizontal.  This is going to woven so that it comes out of the next gap (we’ve done this before).  Identify the gap, and then take the horizontal behind the preceding vertical (stake) and flick it out through the gap. 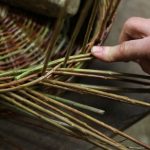 Next pint pulled, and woven to make a pair

Take the trailing vertical (stake).  Pull another pint… swing the stake to the left… bring the stake up and over to the right… weave the stake behind the next two stakes, and then in front of the third.  This stake is now paired up with the horizontal woven in stage 2a.  They are now a pair, lying side-by-side through a gap.
Repeat stage 2a and then stage 2b to create five pairs of horizontals.

Take the trailing vertical:  Pull another pint… swing the stake to the left… bring the stake up and over to the right… weave the stake behind the next two stakes, and then in front of the third.  This stake now pairs up with the horizontal woven in stage 3a.  This is now the first “pair”.

Count back five pairs to identify the trailing pair, and then repeat stage 3a and 3b.  Repeat it until there are only two verticals left; only two pints remaining.

We’re almost there.  This bit looks a bit complicated, but it’s worth hanging in there. 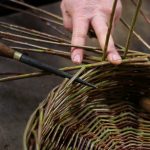 Use bodkin to make a gap under the elbow

Identify the leading trailer of the trailing pair.  Weave this in front of the next two verticals, and flick it behind the third – just like stage 3a.  But there isn’t a third vertical – it has already been bent over (to pull a pint).  So use a bodkin to make a gap in the elbow of this pint.  Thread the leading trailer through this gap.

Now, take the trailing vertical, and pull another pint. Swing the vertical to the left… bring it up and over to the right… weave it behind the next two verticals… BUT there is only one vertical left.  Use the bodkin again to make a gap in the elbow.  Pull this rod through the gap to make another pair. 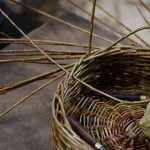 Next “pint” is pulled, woven behind and through bodkin gap

Now we’re on the final straight.  Take the next leading rod of the trailing pair.  Use the bodkin to make a gap under one border rod and the next elbow.  Thread the rod through.

Thread the leading rod of the next trailing pair through a gap under the next elbow and two border rods.  It helps to rolls the rod through this gap like the loop the loop on a roller coaster. 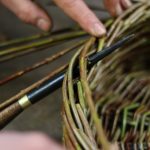 Bodkin makes gap under three border rods and the elbow

Thread the leading rod of the next trailing pair through a gap under the next elbow and three border rods.

Thread the leading rod of the last trailing pair through a gap under the next elbow and four border rods.

The border is finished.  Use secateurs to trim all the ends off, inside and outside.  Stand back and be very proud of yourself.

At the very beginning of the basket (way back with the slath) we used chunky sticks from the butt ends of seven foot lengths.  A slightly shorter length of willow is chosen for each subsequent step (tying in the slath, staking, four rod wale etc.). The shorter lengths have a smaller diameter at the butt end, and are therefore slightly more flexible.  Having said that, it’s also good to use the longest length you can manage at each stage.  Longer lengths lead to fewer joints.  They are also wider in diameter and are therefore more rigid.  However, increased diameter can also increase the risk of “kick-out” – that is, the more rigid butts can make things go wrong.

Willow is measured in bolts.  A bolt is a bundle of willow of a specific size.  It isn’t defined by the number of sticks in the bolt.  Instead it is measured by the diameter around the base of the bundle.  A bolt of willow measures 37 inches circumference around it’s base.  For shorter lengths, with smaller butts, this will lead to more sticks per bundle.

While sweeping-up, you might be tempted to take some of the pieces of willow and trim them into lengths of around 12 inches.  These can be planted into an area of ground to grow your very own willow bed.

Warning… if you carry out this step, you may be exhibiting signs of willow dependency.