Over the last two weeks, with willow baskets and structures, the focus was always upon material selection.  Time spent choosing the appropriate material (length, thickness, whippiness, consistency) always paid off.

Lorna Singleton was our tutor this week to teach a little about how to make a hazel swill basket.  These baskets were traditionally used by cocklers in Morecambe Bay – hence the name “swill”.  Lorna has been learning about traditional baskets and making them – plus variations – for around eight years. 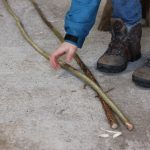 This week, there’s less time needed to select the right material;  there were probably only about 20 hazel rods to choose from  They were all about the same length, just under an inch in diameter, and were about four years growth.  To the uninformed eye (I may be corrected about this), the decision is based on bark colour and thickness.

Having selected our material with relative ease and speediness, the focus this week is on material preparation.  We spent the rest of the day processing the rods into weavers, ribs and rims.

We started by using a GD knife (General Duty) to smooth off the bark.  We gently took the top off any nibs or eyes. 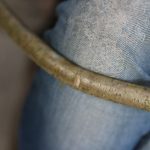 Then it was time to flex the rod.  Starting at the butt end, we bent it around our knee (over time, the hazel worker’s knee develops a useful groove, just below the kneecap).  We took note of the point where the rod started to bend more easily (around 10 inches from the butt end of the rod), and put a little nick into the bark with the knife at the outside of the curve.  This cut should sever the bark and one growth ring.

Back to bending, and this time, as the area to the long side of the cut bends, the bark starts to crack and wrinkle.  As the rod bends, the inner growth rings stretch.  The outer growth ring has been cut, so it doesn’t get stretched.  This causes a shear force between the inner and outer rings, and the crack is the sound of the fibres separating (the crack could also be the sound of the rod snapping – over-bending is to be avoided).  The bark wrinkles as the fibres separate beneath it.

Flick up the split with a fingernail

After the crack and the wrinkle, use your fingernail to flick up the cut end of the bark.  If it doesn’t peel away, it might need to be cut a little more.

Continue bending the rod around your knee, using your fingers to continue splitting along the bark.  The hazel worker’s fingers are often decorated by bindings of tape. 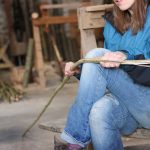 The ideal is to get a weaver that runs the length of the rod.  After this, the rod will probably look a bit bendy and may have a spiral.  Straighten it up, and then start taking a weaver off the opposite side of the rod.  Repeat, and repeat.  With practise, skill, and a modicum of luck, it may be possible to get six barky weavers from one rod.

I had many issues… 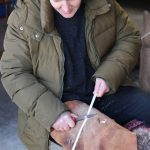 Weavers can have bark on, or can be naked.  If the hazel rod was cut in the winter, the bark will tend to stay on the weaver.  This bark adds colour to the basket, and also adds a bit of protection and an element of waterproofing.  Perhaps this is why baskets with bark on the weavers were traditionally used outside.  A bark-less weaver will happen if a second layer of weavers are harvested from one rod, or from a summer-cut rod. 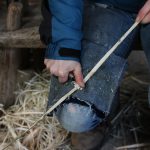 Use the blade of a knife as a scraper to smooth and straighten the fibres on the inside of the weaver.  Hold the blade perpendicular to the weaver and push hard with the thumb on the spine of the blade.  Use a piece of leather on the knee to protect against fashionable jeans.  It could be that the weaver is too thick to get to a good flexibility by this method alone.  Split a thick weaver further, by cleaving along its length.  Make a cut along the fibres with a knife to start the cleave.

Then trim the sides of the weaver to straighten them up.  The finished, dressed weaver should (ideally) be flexible enough to wind around a finger. 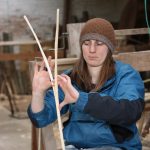 As well as lots of weavers, the basket needs around nine ribs.  Ribs come from the unstripped butt end of the rod, and from the core of the rod (if it’s not good enough to be a rim, see later). 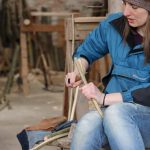 Cleave the butt end into two, through the pith.  Place the knife through the pith, with equal cross-sectional areas to each side.  Push and rock the knife until the rod cracks.  Gently continue to work the knife down the rod.  After a couple of inches, turn the knife over, and work with the spine side downwards.  Control the direction of the split by applying more pressure to the side that getting fatter.

If the rib seems bendy enough, shape it.  If not, consider cleaving into quarters. 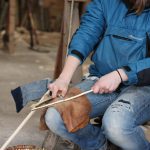 The ribs need to have a almond or eye shaped cross section.  Use the knife to shave the ribs to the right shape.  With the knife braced against the knee (straight arm), pull the rib towards you, against the knife, making long, controlled cuts.

A basket also needs a rim.  Two “U” shaped rods make the rim.  The rims come from the rounded core of the rod.  Once all the weavers are off, use the knife to round off the core.  Then start to manipulate the rod.  If it feels evenly bendy, continue to work it until it can be bent to a radius that is about basket sized.  Tie it in this position to dry.

With all the components complete (who am I kidding?  I’m bound to need more), I’m SO looking forward to actually weaving the basket…